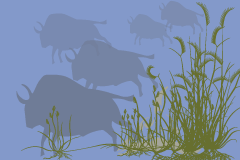 An exhibit on the masters of the plains

The bison is a North American species whose story stretches from Plains Indian hunters to entrepreneurial industrialists to dedicated conservationists to today’s producers and enthusiasts.

Saving the bison from near extinction required a core of concerned individuals that became an international movement of people with conservation ideals, Native Americans, and Great Plains ranchers. Today natural preserves and ranches in all fifty of the United States and all of the Canadian provinces support herds of about 500,000 bison.

This exhibit originally toured as The Bison: American Icon through the NEH on the Road program, based on a project by the C. M. Russell Museum, Great Falls, Montana. The exhibit was designed and produced by Flint Hills Design in collaboration with Kauffman Museum. The National Buffalo Foundation acquired the exhibit at the end of this original tour. Kauffman Museum has worked with the NBF to refurbish and update Bison and is responsible for touring the exhibit across North America.